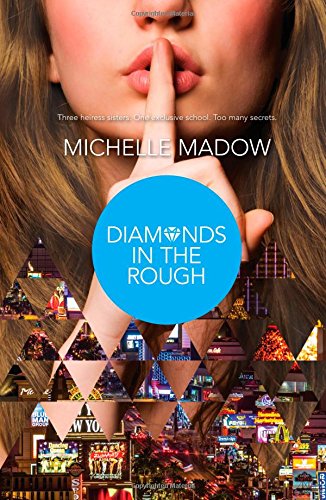 On Friday, Dec. 12, Michelle Madow, author of The Secret Diamond Sisters series, visited the Media Center, speaking to students about her upcoming books and journey to becoming an author. Madow is currently in the process of completing a trilogy. Her most recent book Diamonds are Forever will be released next year on Oct. 27. and will be the last book to complete her trilogy.

Madow is a 27-year-old author from Boca Raton, FL. She started writing as early as second grade, but knew she wanted to become a writer in her junior year of college. Madow was an English major and took a class called Intro to Creative Writing. Her first assignment in the class was to write any piece of writing she wanted; she created a piece of writing suited for the first chapter of a book. After she had turned in her work, Madow was shocked by the response of her professor and classmates. They all encouraged her to continue writing so they could know what happened in the rest of the uncompleted book.  From that point on, Madow knew she wanted to become an author for the young adult genre.

Madow was not successful in finding a publisher for her first book, Remembrance, so it was self-published. She toured around the U.S. to advertise her book and sell copies out of “the back of her trunk,” she said.

“Writing a book is work,” Madow stated while explaining how she writes about 1,000 words per day to work towards completion. She also said how she had an “absolute blast” writing books that would later be read and seen on the shelves of bookstores.

The The Secret Diamond Sisters trilogy is about three sisters who discover a family secret and are forced to move to Las Vegas. There they meet new people, including rich and upper class kids their age, and each face struggles typical teenagers would. Madow revealed how she wanted to write a book where readers could relate to the characters. She wanted the characters in the novel to have a more realistic life compared to most books where the character’s life seems too “perfect.” Madow said her books are similar to the Gossip Girl and The Hunger Games series because they are both based around the struggles of teenagers or young adults.

Madow encourages young writers to pursue their dream of becoming an author. Madow will continue writing and is looking forward to next October when Diamonds Are Forever is released.

If you want a picture to show with your comment, go get a gravatar.