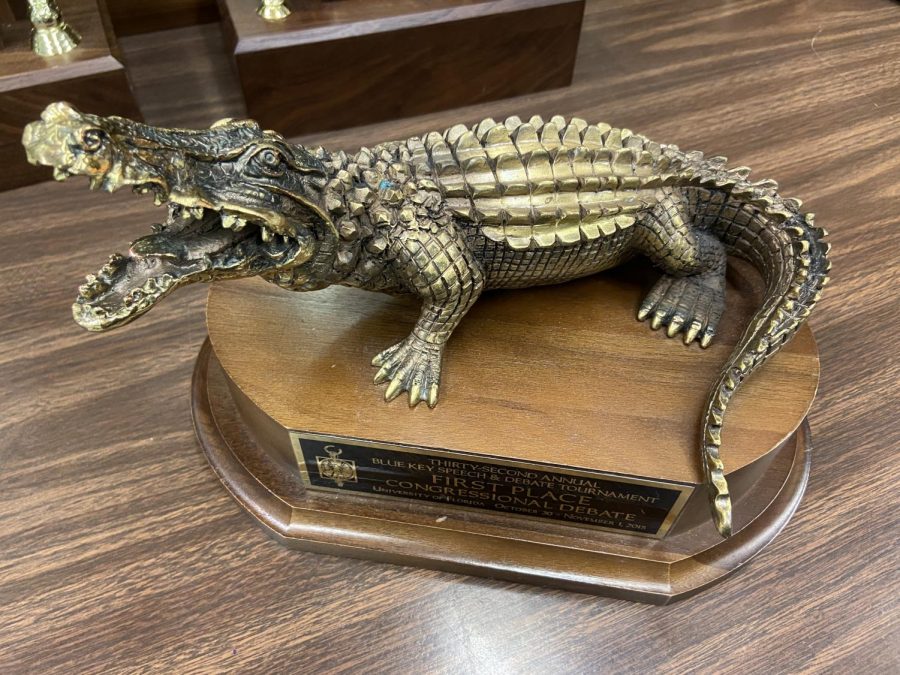 The Blue Key Gator award is displayed among other awards in the debate room.

Cole Sargent arrived at partner Ophilea Abidoye’s house at 8:30 a.m., a mock stage already set up in her living room. Dressed in a gray suit and purple tie and Abidoye in a purple suit to match, the pair logged into Tabroom, the official speech and debate website housing the schedule for the day.

They were preparing to deliver their speeches for Florida’s Blue Key, a speech and debate competition hosted by UF every year on October 29-30. Their speech category was duo interpretation (Duo), a 10-minute partnered oration that two people conduct together and must write themselves based on a published story or play. With online competitions, they would have to log into video-chat rooms and perform live against other debaters from all over the country. Once their speech was finished, the judge would decide their score and the highest would take first place that round and move up to the next.

A performance like this requires the two to be completely in sync, with limitations like no eye contact, touch, or props allowed. The speech must be completely memorized, and, in a category like interpretation, speakers have to bring enthusiasm and the ability to perform dramatically and often comedically. The two must be in sync off the stage just as well since, at this year’s tournament, Abidoye and Sargent had double-entered. This meant that, along with Duo, they each would be competing in another speech category at the same time. Abidoye was competing in another category called Dramatic Interpretation (DI), and Sargent in Humorous Interpretation (HI), both requiring another 10 minutes of memorized speech they would have to perform live.

“We only have like an hour to do three events; each [event is] 30 minutes, so sometimes we’re late, sometimes we get in there and only the judges are there and all the other kids left, so we’ve got to be careful on timing so we don’t get penalized,” Abidoye said.

With double entering, scheduling becomes an issue, and communication between them becomes absolutely key. Luckily with Sargent and Abidoye, they already have the foundation of friendship to build from, having known each other since their freshman year. It wasn’t until this year that they decided to become partners and the speech abilities they have honed over the last four years complement each other.

“Each one of them brings something different to the table,” speech and debate coach Dario Camara said.  “Cole brings his love for acting and thinking of all the different elements of the environment, and Ophilea brings the character development and structure of the scene and thinking about how the audience will react, so they both bring two very different things so it works very well.”

Their effectiveness as a team cannot be better seen than in their first-place win this year at the Yale University Invitational, a speech and debate competition that had some of their biggest competitors. Their success comes down to not only abilities but proper communication.

“We have to coordinate everything and make sure it’s in the best possible order for both of us so that we not only are doing what we need to do but that we both feel comfortable, so that when it comes time for us to perform our duo, then we’re both in the right mindset,” Sargent said.

It’s a fight against time to double-enter and is not encouraged for beginner debaters, as it takes a strong ability to time manage and memorize two different speeches. The two have to maintain the image for perfection, as once the camera and mic are on for the performance, there’s no room for error. However, once the camera is off, it’s a whole different story. Not only do the two have to keep each other in check, but performing at home also means dealing with family members going about their regular daily schedules. While speeches are happening in one room, preparation for dinner is happening in another.

“On screen, it looks like everything’s fine but behind the scenes, people are screaming, yelling, they’re making noise, the food’s flying around,” Abidoye said.

As much pressure as it seems to double-enter, it provides a great opportunity for competitors to earn points and gain achievements, and Abidoye and Sargent are far from novices at competing. They have been debating on the team since 9th grade, and the Blue Key competition holds an important place in the hearts of seasoned competitors.

Unfortunately, with it being online, senior debaters didn’t have the opportunity to go one last time to their first traveling tournament. However, that didn’t make this competition any less meaningful.

“With it being our last year, we wanted to make sure that we did well because we wouldn’t have another chance to do something like this again,” Sargent said.

It has been years since the school has seen a gator award, an award signifying a first-place win at Blue Key. Going against all obstacles, Abidoye and Sargent were champions of their Duo category and brought home a historic win, making good on their promise to do well.