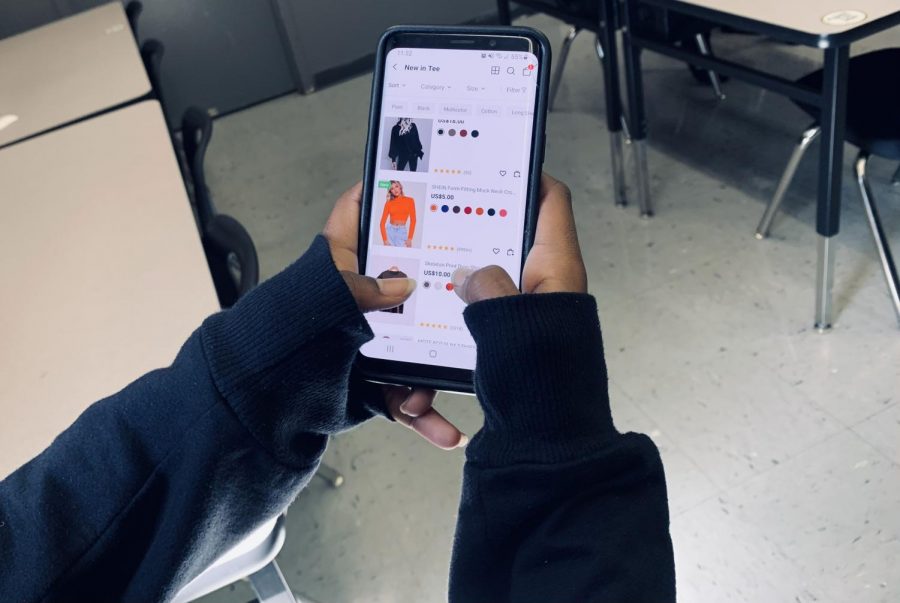 Shein, a fast fashion app, increased in popularity during the pandemic.

Shein, a well-known online store, has recently gained popularity in the past few months with record breaking sales in 2020 of $10 billion and becoming the most visited lifestyle fashion and apparel shop in the world. Peaking in active users again in 2021 with 7 million users in the United States. It’s safe to say Shein has already left an imprint in our wardrobe’s and influenced many outfits worn on campus.

Shein has been around since 2008, but slowly started gaining popularity which ended up skyrocketing in June 2020 due to COVID-19. First growing viral on various popular social media sites such as Tik Tok and Instagram, it managed to pull young consumers into its app. The hype for Shein has since died down, but many students on campus still actively use the app.

“I use Shein at least twice a week if not more,” sophomore Natalie Solomon said. “Shein really improves my sense of style, not only because many of the clothes are trendy pieces, but because I can also see ways to put outfits together.”

The app has thousands of different styles appealing to everyone on the site and hundreds of new styles are added daily. Most clothes on Shein can range from $9.99 in tops to under $4.99 in bottoms and even lower with clearance items. With extremely low prices and trendy outfits, it allows shoppers to buy more for less, which has already positively affected many students’ lives on campus.

“It greatly impacts what I wear to school because as a more affordable clothing store, it allows me to spend more on clothes for a bit less and thus gives me a wider selection of clothes to choose from,” Solomon said.

Freshman Madison Roden said that she uses Shein about once a year but even though she doesn’t use Shein as frequently it still impacts about 50 percent or more of what she wears to school.

“I think people do favor it more because a lot of people are now lazy and to drive [to stores] is a lot of work,” freshman Marianna Valderrama said.

One of the more favorable benefits of online shopping is free shipping because people enjoy having their purchases delivered to them without physically having to go to the store.

Although most students prefer online shopping, others also argue otherwise.

“It’s not really reliable with how fast you get your clothes because they say a certain day and it comes a week later,” Valderrama said. “It is a lot of work to return stuff because you have to mail it back, but in person [is] complicated but not as hard.”

Students who favor retail shopping also mentioned how they favored in person retail shopping over online shopping because purchasing items online made it harder to get accurate sizes. Not to mention, clothes may look different online rather than in person, which could potentially be misleading.

“I can’t try it on and make sure I actually like how it looks,” Valderrama said.

continue to grow as online shopping outpaces traditional shopping. It’s not just the trendy outfits and styles that contribute to Shein’s success, but its affordable prices and convenience.