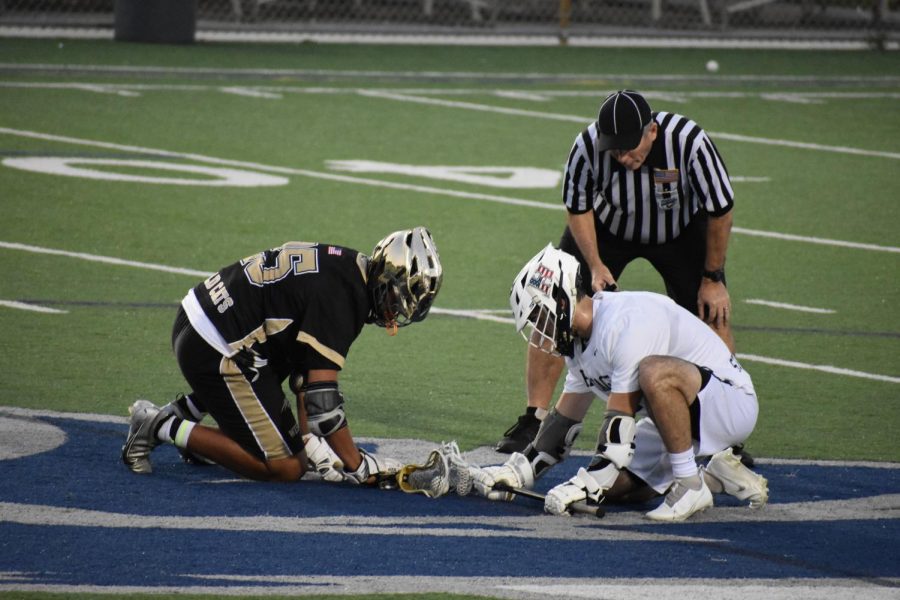 Junior Justin Tedim battles at the faceoff X versus American Heritage spring of 2021.

While to many September 1 is just the start of the ninth month, for junior student athletes with aspirations to play collegiate sports, it marks an important day in their recruiting process. In collegiate sports such as football and lacrosse, September 1 of an athlete’s junior year is when coaches can start directly contacting them and students can announce verbal commitments to universities. With the help of teachers, coaches and teammates who have experience in the recruiting process, student athletes can navigate the tedious process of finding a new home at their university of choice.

David Parrish, a senior defensemen for the Men’s Lacrosse team shared his story and the steps he has taken over the last few years to improve his skills and abilities as an athlete and to get on coaches radars. One of the parts of the recruiting process that he emphasized was that of attending showcases.

”I have attended various showcases and tournaments in order to obtain game film and get my name out there, whether it be at tournaments or showcases,” Parrish said.

Local and travel teams expose players to a wider audience of coaches and increase name recognition. Student athletes with higher ambitions play for both their school teams and travel teams that either play in state or out of state competition. According to edweek.org, the Centers for Disease Control and Prevention’s 1991-2019 High School Youth Risk Behavior Survey Data showed that about 57 percent of high school students across the country played on at least one community or school team in the past year.

The competition to play at the next level is very easily displayed here because student athletes are competing against others on their teams, in their state, and even across the nation for lucrative roster spots and getting the most amount of exposure is crucial. Junior Justin Tedim, an active football and lacrosse player, employed these strategies to get his name out to college recruiters.

”I currently play for multiple travel teams that play both locally and nationally that allow me to improve and get a lot of live game time outside of the school season. I have also attended multiple showcases and recruiting tournaments with college coaches in attendance with the hope that I will catch their attention,” Tedim said.

Above all the most important part of a student athlete’s life is their academic success. Student athletes not only have the responsibility to keep up their performance on the field but also in the classroom because this is a major criteria that universities look at when looking for recruits. Many talented athletes who have allowed their grades to slide have lost opportunities at the next level, so it is crucial, especially junior year, to keep up to date with assignments and studying.

”The players that will be picked up by the highest level programs will need to be academically competitive, as well as athletically,” said assistant lacrosse coach John Davis.

The next step for juniors who successfully get onto coaches’ radars is to visit schools who have shown interest in them and have invited them onto the campus. These visits can range from just scouting out the campus with a guide or even being invited to on campus activities that will really allow a recruit to fully grasp the environment.

A recently committed athlete to Queens University, Joseph Andrews who is currently a senior at The American Heritage School in Boca/Delray added,”I visited a handful of different schools and it was really helpful for me to understand the vibe of the campus as well as being able to talk to coaches face to face rather than through a screen.”

Another reason that getting recruited in junior year is advantageous is because playing at the next level is a privilege that many are competing for, so starting out earlier is for the better. According to NCAA, college basketball has 540,769 participants in high school but only 18,816 of them or 3.5 percent play across the three divisions in the NCAA. So it is crucial that student athletes at this point in their recruiting process really get themselves out there to take the next big leap forward.